Vermont comes alive in winter, especially on Stowe’s extensive trail system which is optimal for many activities, including fatbiking. Überwintern is an annual fatbike festival featuring a day of fatbike group rides, demos and sharing local brews around warm fires with friends on a winter’s day. 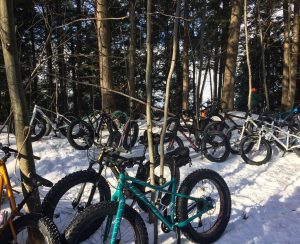 Originally set for Saturday, January 6,  Überwintern has been moved to Sunday, January 7 due to threat of uncommonly cold temperatures. Now in its sixth year,  Überwintern is organized by Mountain Bike Vermont and hosted by the Stowe Trails Partnership. Überwintern headquarters will be located conveniently off the Stowe Recreation Path at Sushi Yoshi where registration, group ride departures, demos and lunch will take place. The “remote aid station” (a.k.a “party central”) will be set up at the von Trapp Brewing Bierhall, replete with a bonfire, warm pretzels and local libations to keep riders rolling.

The Stowe Trails Partnership (STP), formerly known as the Stowe Mountain Bike Club, manages and maintains approximately 35 miles of multi-use trails on public and private land throughout Stowe. Working closely with the Town of Stowe and the Stowe Land Trust, the goal of STP is to expand trail access and cultivate one of the premier mountain bike trail networks in the northeast. In that Stowe’s trails are focused on non-motorized recreation, all of the fatbike trails are groomed by hand in anticipation of  Überwintern; community volunteers snowshoe and pull weighted groomers to ensure a fun, safe and consistent trail system for the weekend.

In late October 2017, the Cady Hill trail system was impacted by a hurricane force wind storm that knocked down hundreds of trees, burying the trails and making it unsafe to pass. Thankfully, Cady Hill is one of several trail systems in the area. Shuttles will take riders out to remote locations to ride back into town. Überwintern proceeds will be donated to STP to help cover costs repairing Cady Hill trails with the assistance of professional loggers and timber harvesters over the next several months.

Ticket price includes group rides, lunch (with both carnivorous and veggie options), on-site demos as well as beverages from local favorites like Green Mountain Distillers. Group rides throughout the day for all levels including beginner, intermediate, advanced fatbike riders. Rentals also will be available. Click here for schedule and information.