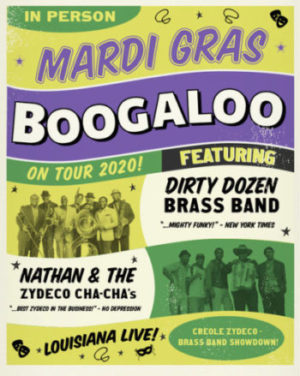 New Orleans-based Dirty Dozen Brass Band, founded in 1977, are pioneers of the modern New Orleans brass band movement. They have taken the traditional foundation of brass band music and fused it into a blend of genres including Bebop Jazz, Funk and R&B/Soul. This unique sound, described by the band as a ‘musical gumbo,’ has allowed the Dirty Dozen to tour 5 continents and over 30 countries, record 12 studio albums and collaborate with a range of artists. The Dirty Dozen Brass Band is synonymous with genre bending romps and high-octane performances.

The music of Nathan and the Zydeco Cha-Chas is the expression of a remarkable South Louisiana family and provides a direct connection to Zydeco’s storied pioneers such as Clifton Chenier and Boozoo Chavis. Dennis Paul Williams, Nathan’s brother, brings his jazz-influenced guitar chops to the band. The eldest Williams brother, Sid ‘El Sid O’ Williams is a Lafayette legend unto himself. Ever since forming the the Cha-Chas back in 1985, Nathan Williams has shared his unique take on this blues and dance music of Louisiana Creole around the globe, from Lincoln Center in New York to The Grand Ole Opry in Nashville! Laissez les bon temps rouler!